Why Natty Grace? What does it mean?

The most frequently asked question that we get is "Why Natty Grace, What does it mean?" When shopping in store our owner is always asked "Oh, you must be Natalie!" and what a blessing, because it always leads straight into our mission and purpose and the "WHY" behind our business. Our owners name is not Natalie, but God had a hand in this name, because this always naturally opens the conversation to tell them who we are! So here's the scoop: 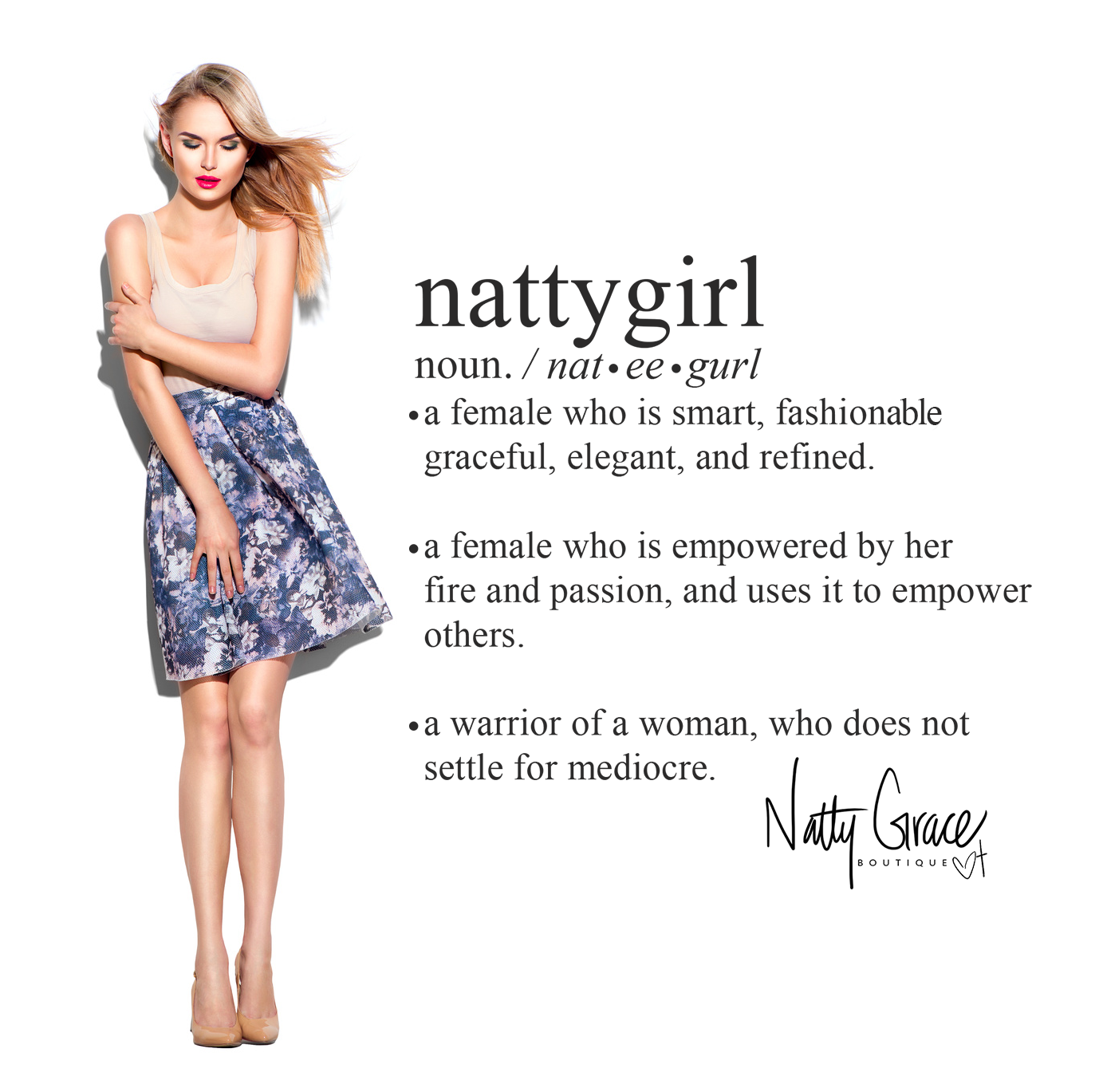 (of a person or an article of clothing) smart and fashionable.

/ɡrās/ noun
noun: grace; noun: His Grace; noun: Her Grace; noun: Your Grace
simple elegance or refinement of movement.
"she moved through the water with effortless grace"

We wanted the mission, foundation, and purpose of our business be in the forefront, and not just be a name. This journey is not about us. It's about our mission. It's about building a community of strong, healthy, happy, and empowering women!

The mission of Natty Grace Boutique started in 2014 in the heart of those who believed in our owner, when she didn't believe in herself.

In 2014 our owner had started her career in Sports Marketing for a local Hockey team in Lafayette, Louisiana, where she had grown strong roots. She loved the team she worked for, she loved the fans, and they loved her right back. They had become family. She handled a long list of roles between the office and games, and just a few of those roles were, Lead Marketing and Sales Coordinator, Customer Service Rep at games, and Graphic Designer. She helped design the merchandise that was sold to fans, and even created her own line called "#WearConfidence" that she sold on the side and donated portions of profits to local ministries and charity organizations. It wasn't much, but it was something she enjoyed doing on a small scale.

One game, a loving fan came up to her and suggested that she put her passions to work and open a boutique of her own that would allow her to use all of her talents towards a platform that could make a difference. She loved making her graphic tees and LOVED dressing up for work and the games, but as awesome as that sounded to her, she just couldn't imagine that anything that grande would ever be a possibility for her. She was nothing more than a girl from a small town, with a single mom, from a low income family. "I just don't think that something like that is in the cards for me" she replied to the fan.

It was in that moment that the seed was sewn for a purpose much greater than her own confidence would allow.

Years went by. She moved from Lafayette to start a new life with her fiance in New Orleans. New City. New job. New life. It was a huge shake up. Her new job felt more like a dull forced task than what she was used in sports, where enjoying your job was an actual part of the day, but the seed had been planted, and although seemed dormant, was still there and purposefully waiting to blossom.

It was January 1, 2017. She woke up. Miserable. Looking back in retrospect at a time where there was a light in her life to get up in the morning. It was that day that she decided to make a decision. After 3 years, she was going to do it. She was turning 25 that year, and felt like there was no better time than the present. She realized that she was the thing standing in her own way. That she had already gotten so much further than what society would have placed her at. She had the passion. She had a purpose. It wasn't going to be easy, but it had to happen. She immediately started planning. It was hardly 4 months later she quit her full time Director position, and started working full force towards this dream.

A year of thorough planning, and a fire inside to do greater than just open a business, Natty Grace Boutique is finally a reality. A lease signed, a plan in place and in full force, and a mission to go beyond business is instilled. A month before opening, she chose to partner with a great Louisiana ministry, Lioness Arising Ministries, and the journey begins...NOW!

"Believe in yourself. No one knows your talents like you do. No one knows your passion like you do. So if others can already see it, it must be great. Don't let fear stand in your way of living your God given PURPOSE, and flourishing beyond your wildest imagination! It doesn't matter the size of the dream, if it's been done before or not. Do what fills your heart with passion, and I promise you will do things that only YOU can do, because no one has your fire!"

By using our website, you agree to the use of cookies. These cookies help us understand how customers arrive at and use our site and help us make improvements. Hide this message More on cookies »
Fast Shipping!
Unique Local Artists and Designers!
Handcrafted Items
Modest Pricing!